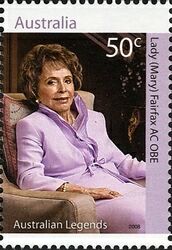 There’s been blood on the floor of the Fairfax newsrooms this week with the announcement of nearly 2000 job losses amongst journalists and printers over the next three years, and the scaling down of the Sydney Morning Herald and Melbourne Age from broadsheets to tabloids.

Many blame Fairfax’s sliding fortunes on the internet revolution and the slowness by the Fairfax board to respond to changing technology. But as David Leser writes, the rot set in during the late 1980s when young Warwick Fairfax returned from America brandishing an MBA from Harvard University and strong Christian convictions to take over John Fairfax Ltd, the company his father, Sir Warwick had run in one position or another for the better part of 50 years. Young Warwick’s ambitions were aided and abetted by his mother (Lady) Mary Fairfax in what became both tragedy and farce for the House of Fairfax.

THE TEARS HAVE DRIED AND Lady (Mary) Fairfax is leaning forward on the sofa clutching her letters and photographs. The butler is hovering just beyond the reception room and her PR man is looking anxiously at the floor. ‘Now, do I seem like a person who is interested in revenge?’ she asks in a deep whisper. The question comes tumbling out at the end of a two-hour talk-fest brimming with gushy memories and savage recriminations. Later, serving a lunch of braised chicken and apricot souffle, she pursues her defence: ‘What sort of character do you think I am? You tell me.’

What can one say? After 32 years in the public eye; after a rumoured love affair that scandalised society; after a harrowing divorce trial, a celebrated remarriage; after a welter of extraordinary parties with an endless array of famous guests; and, now, with an Australian media empire in ruin and a family filled with bad blood, it is no simple question to answer.

Is she one of the most monstrously misunderstood Women in Australian history, or is she as deceptive as she is clever? Is she the instigator of a company takeover gone disastrously wrong or the victim of markets, male chauvinism, banks, bad advice, bad luck-and a son, Warwick, who was always hopelessly out of his depth?

Is she a manipulative, scheming woman, hungry for power, wealth and status? Or a tireless worker for the arts and charity, as well as a generous, fun-loving hostess and friend? Is she a family maker or an empire breaker? A proud matriarch who frequently owns up to only three children or a tormented mother of four? Is she a Jewess or a Christian? Does she sit atop staggering wealth or horrendous losses? Is she a figure of romance or of vengeance?

And is it Mary or Marie?

There’s been so much talk, so many delicious rumours, so many versions of the truth that the total picture is blurred. After this íntewiew, it looks positively surreal.

For two hours, seated in the reception room of her sprawling mansion, Fairwater, Lady Fairfax has talked incessantly in half semences and homílies about love, money and treachery as she endeavours to set the record straight about herself and the role she is purported to have played in the decimation of the oldest family-run medía company in the World, John Fairfax Ltd — a company which boasts assets such as The Sydney Morning Herald, The Age and The Australian Financial Review. But it is like trying to decipher hieroglyphics. Mary Fairfax’s version of herself, as it emerges from the tangled cobweb of emotions and events she recounts, is diametrícally opposed to what most of the 70 people spoken to for this article have to say about her.

It took Lady Fairfax 12 months to agree to this meeting. After postponing it twice, she finally selected a date — the day after our deadline. She then set the condition of seeing the questions in advance. Four were rejected before we arrived, one — about her religion — after we got there. At the end of the interview, she asked to see the story before publication. ‘For the purposes of accuracy, not censorship,’ her PR man, Murray Williams, insisted. ‘Unless there’s something you’re ashamed of … (The request was denied.)

Mary Fairfax is a mercurial woman. In some ways her story reads like a Greek tragedy. In others, like a French farce. Either way, it’s one of the great Australian dramas of our time, a highly charged epic that has run through three decades of a newspaper a nation’s-­life. In the dead centre, of course, stands The Sydney Herald, the oldest and most prestigious newspaper in the country. Without it, Mary Fairfax’s enigmatic character would be of little public interest.